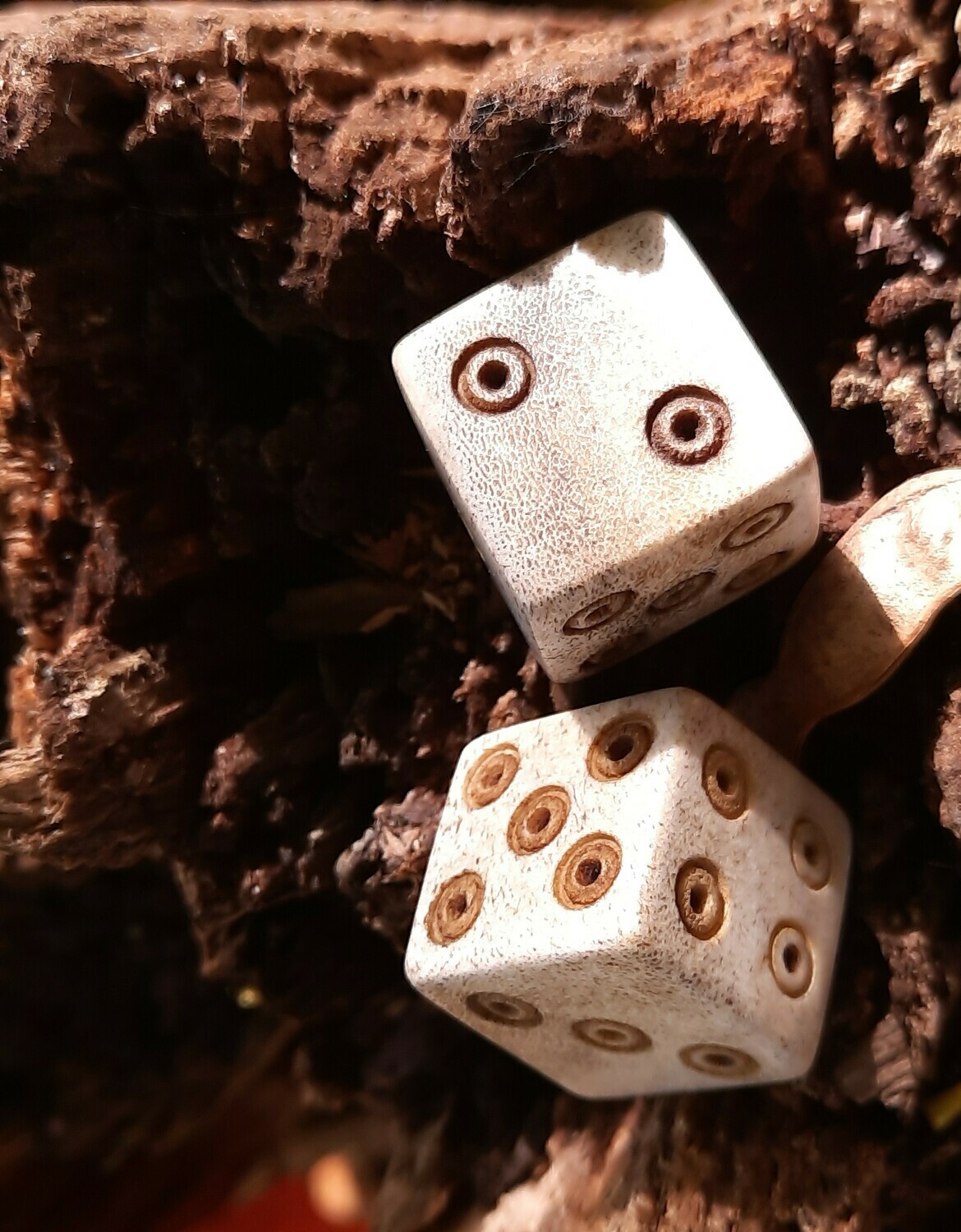 Material: antlers. No animal has been injured, as moose and deer drop their antlers from late March to mid-April. As they are known for their
strength and toughness since old times, the antlers were used for carving jewelry, amulets, ritual figurines.

Creation time: is 1-3 days from the date of purchase. As each art piece is hand-carved, some small details can be slightly different from the images in the photo.

Dice games have its long history.

In addition to using dice to settle any sort of disputes or distribute goods impartially, they were also used for entertainment and gambling as we do it today. One popular game known as Tali. Like the familiar dice game Yahtzee, the count of the dice was scored like poker hands. No special board was in use. If you didn’t have dice, you could use animal bones / astragaloi (knucklebones of sheep and goats). A round consists of each player throwing and the winner of that round was the one with the best score. Multiple hands could be added for a total score to determine the winner. A Venus was the highest hand and consisted of a one, three, four, and six. A Senio was a six with any combination of other numbers. Vultures were all the same numbers and the worst score was Dogs, was all ones, no Luck:(.

In Biblical terminology, the rolling of the dice is known as casting lots. An it was really popular term, appearing in Leviticus, Numbers, Joshua, 1 Kings, 1 Samuel, 1 Chronicles, Nehemiah, Esther, Job, Psalms, Proverbs, Ezekiel, Joel, Obadiah, Jonah, Nahum, 2 Esdras, all four of the Passion narratives, and, finally, in famous Acts where the Jesus Apostles must choose a replacement for Judas. The Biblical view of dice is probably best expressed in Proverbs 16:33, “The lot is cast into the lap, but the decision is wholly from our Lord.”

Like the plastic dice we have today, opposite sides of the ancient Roman dice always added up to seven. (you should remember that the opposite sides of our dice are one and six, three and four, and two and five.) Dice were shaken in a special Shaker cup then tossed, as croupiers do today. Bets were placed in much the same way as we have it today.
Dice games were played in taverns all over Roman Empire as well as gambling houses, brothels and on the streets. The emperor Commodus, who was especially fond of gambling with dice, turned the Imperial Palace into a brothel and gambling house to raise money for the treasury when he bankrupted the Empire. Very sad story...
Gambling with dice was forbidden in the streets of Rome and Roman soldiers often fined the gamblers or made them move inside. Under Roman law, games of chance played for money were forbidden with the penalty being a fine of four times the value of the stakes. This led to the invention of another Los Vegas staple, gambling chips. Now the gamblers weren’t playing for money; they were playing for no value chips. That the chips were marked with specific symbols indicating their value didn’t seem to bother the authorities.
These chips, called roundels, have been found throughout the Roman Empire and usually were made of bone. They carried numerical markings on one side, most commonly I, V and X. Many of the chips marked with an X have an extra vertical line through the middle, symbolizing a denarius. Chips have also been found labeled remittam libenter — I will gladly repay — the Roman equivalent of an I.O.U. Presumably, the repayment would have been made to or from the tavern or gambling club, much the same as is done with gambling tokens in Las Vegas gambling industry today.

In a final aside, the Romans flipped coins just as we do. Coin tossing was known as capita aut navia, which means heads or tails. Early Roman coins always had a portrait of the Emperor on the face and ship on the tail side. Recall the words of Jesus when asked about the legality of paying taxes in Matthew 22:19-21.
“Show me the coin used for paying the tax.” They brought him a denarius, and he asked them, “Whose image is this? And whose inscription?”
“Caesar’s,” they replied.
Then he said to them, “Render unto Caesar what is Caesar’s, and to God what is God’s.”