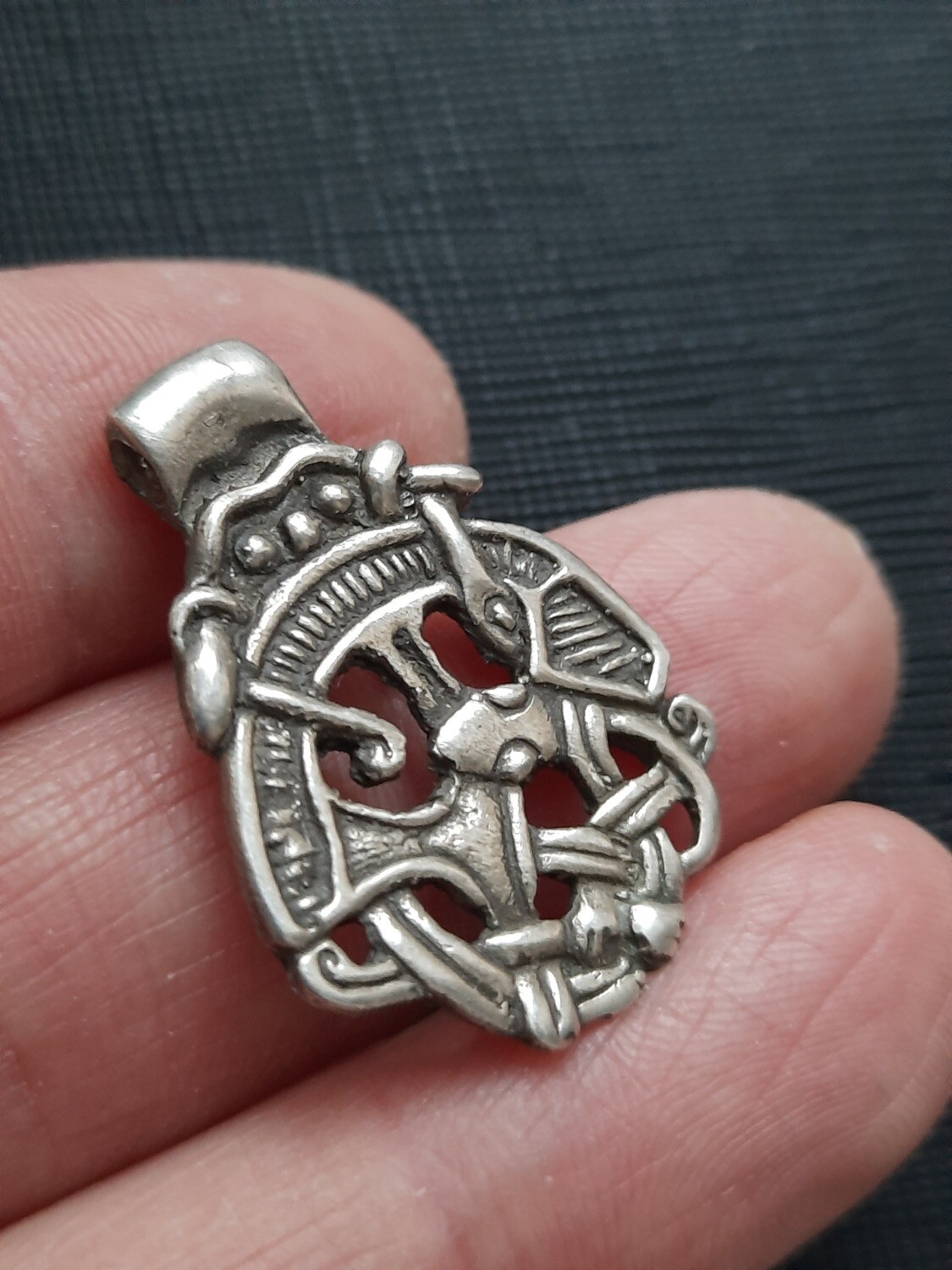 God Thor sitting in the boat and his head very schematic that is typical for Viking age. In general the depiction of Thor (and the Midgard Serpent) similar to a runestone at Altuna, Uppland, Sweden, carved around the 11th century. ‪It depicts the well-known story of Thor fishing for Jormungand, the World Serpent who will be his foe at Ragnarök.

Norse necklace with twisted serpent is hand-forged in pure silver with old traditional technologies. This amulet is full of style and is a fine gift for Viking art and history enthusiasts and fans.

The Norse gods had arranged a lavish feast with Aegir and Ran, two gracious and hospitable giants who dwell beneath the sea. Aegir and Ran offered to host the banquet, but only if the gods could provide them with a kettle big enough to brew mead for all of the invited guests. The gods knew that, of all the beings in the Nine Worlds, only the giant Hymir possessed a cauldron large enough for this purpose. Thor, the brawniest and bravest of the gods, as well as the one most accustomed to dealing with the giants – not all of whom are as friendly to the gods as are Aegir and Ran – volunteered to obtain this cauldron from Hymir.

Upon the god’s arrival at his house, Hymir slaughtered three fat bulls for provisions for the two during Thor’s stay. The giant was shocked and dismayed, however, when Thor ate two of the bulls in one sitting to assuage his legendary hunger. Because of this, the angry giant declared, they would need to go fishing in the morning for the next day’s food.

In the morning, Hymir sent Thor to procure bait for their hooks. Thor went to Hymir’s pastures and slaughtered the biggest of the giant’s remaining bulls, intending to use the head as bait. Hymir was now more irritated than ever at the rash youngster, but hoped his strength and daring would be of help on their fishing trip.

The two got into the boat, with Thor in the stern. The god rowed them out to Hymir’s usual fishing grounds, where the giant, to his delight, caught two whales. But then, Thor began to row the boat further out from land. His companion grew fearful and demanded that they row back at once, “because,” he reminded Thor, “Jormungandr lurks below these wild waves.” Thor, the age-old enemy of that monstrous sea serpent, refused.

At last, Thor dropped the oars and cast his line into the water. After an ominous silence and calm, Thor felt a mighty tug on his fishing line. As he reeled it in, a violent rumbling shook the boat and whipped the waves. The giant grew pale with terror, but Thor persisted. His feet were planted so firmly in the bottom of the boat that the planks gave way and water began pouring in.

When the serpent’s head, with the hook in his venom-dripping mouth, at last came up above the water level, Thor reached for his hammer - Mjollnir. At this moment, Hymir panicked and cut the line by his knife. The howling snake slunk back down into the ocean. Thor, enraged at having missed this opportunity to end his greatest foe, heaved Hymir overboard.

Thor, with the two whales slung over his shoulders, waded back to main land, picked up Hymir’s cauldron, and returned home to Asgard.

In Norse mythology, Jörmungandr (Old Norse: Jǫrmungandr, pronounced, meaning "huge monster"), also known as the Midgard (World) Serpent (Old Norse: Miðgarðsormr), is a sea serpent, the middle child of the giantess Angrboða and Loki. According to the Prose Edda, Odin took Loki's three children by Angrboða—the wolf Fenrir, Hel, and Jörmungandr — and tossed Jörmungandr into the great ocean that encircles Midgard. The serpent grew so large that it was able to surround the Earth and grasp its own tail. As a result, it received the name of the Midgard Serpent or World Serpent. When it releases its tail, Ragnarök will begin. Jörmungandr's arch-enemy is the thunder-god, Thor. It is an example of an ouroboros.