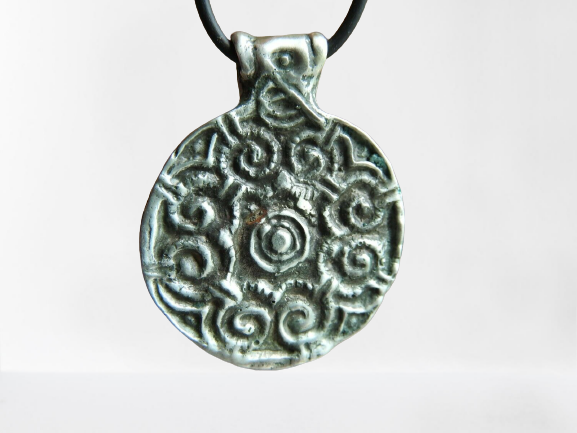 Viking hand-forged amulet in pure silver with old traditional technologies. This amulet is full of style and is a fine gift for Viking art and history enthusiasts and fans.

The Vikings were Scandinavian seafaring people who raided West European villages, towns and cities and extended their reach to the Mediterranean, Central Asia, the Near East, North Africa and North America. As E. Roesdahl and D.M Wilson explain (p. 27, From Viking to Crusader: The Scandinavians and Europe 800-1200), “They saw great opportunities for plunder and seized the chance to gain profit, at first from the monasteries scattered along the coasts of western Europe. Then came devastating plunder and ransom exacted from markets, towns and kingdoms… [leading] to the acquisition of power over the whole regions; to settlements, and to the establishment of international trade stations.”

Our knowledge of these accumulated riches comes from the thousands of Viking hoards that have been found in Scandinavia, which are comprised primarily of coins, jewelry - amulets and other ornamental objects. Often times, the majority of the items are made of precious metals including silver. The question of what value silver had to the Vikings is a complicated one. J. Graham-Campbell (p. 36 in The Vikings) mentions its display as a symbol of wealth and success to be worn while living and to be buried with the deceased. It was used to reward retainers and provide lavish hospitality. It was also used for monetary purposes, valued by weight for commerce, rather than kept in coin form. “If, in mid-transaction, one suddenly found oneself short of a small amount of silver to complete a deal, all that was necessary was to cut the end off one’s arm-ring or brooch to make up the desired weight. Here then is the explanation for the fact that so many Viking silver hoards…consist of a mixture of complete ornaments and coins together with so-called ‘hack-silver’—their cut-up fragments.”

For a similar example of Viking Pendant from the Folhagen hoard found in Gotland, Sweden, see no. 143 in Roesdahl and Wilson, op. cit.