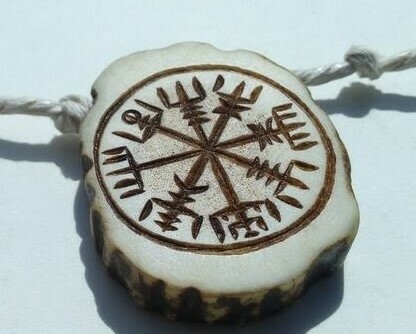 This amulet is the symbol of guidance and protection and has Tiwaz rune on the backside. The t-rune ᛏ is named after Týr, and was identified with this god. The reconstructed Proto-Germanic name is *Tîwaz or *Teiwaz. Tiwaz rune was an ideographic symbol for a spear.

There is a Norse charm called the Vegvísir. It comes from the Huld Manuscript, which was collected in Iceland in approx. 1860, but allegedly contains much older information. The Vegvísir (Icelandic for "signpost") is intended to provide the holder of the charm with the ability to pass through rough weather without getting lost.